What We've Lost is Nothing 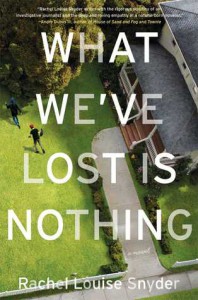 How we react to life-changing events is often a common theme in modern literature these days and more often than not they're huge cataclysmic disasters, so it's nice to come across a novel that pares down the actual event in favour of those lives that are affected.

A Chicago neighbourhood suffers a string of burglaries all on the same day with varying degrees of loss and upset with one family, the McPhersons, suffering more than most and it is Michael, the head of this household, that Snyder utilises to emphasise the nastier side of human nature. Michael's prejudices and paranoia come to the fore as his life slowly disintegrates over the course of 24 hours, especially his relationship with his wife Susan (the liberal voice of the novel) and his teenage daughter Mary-Elizabeth who's desperation to 'belong' leads to tragedy.

Alongside the McPhersons, we have Alicia and Dan, a young couple too dependent on others for their lifestyle and stuck in a very deep rut, a Cambodian family unsure if their lives in America are really what they want, a restaurateur living in denial about his abilities and an almost blind man who sees more than all the other residents combined.

Snyder's characterisation is strong, well-researched and never clichéd giving the reader a true empathic relationship with even the most abhorrent characters, and by keeping the narrative to just one day, with chapters split up into times, the novel never gets stodgy. This flow builds up to an exciting last 50 pages that make it very hard to put down. I can imagine that somewhere there's a tv executive looking at this with an eye to turning it into a one-off drama, and I think it would work very well.

Even if, at times, the overt political messages seemed a bit shoe-horned in, this is a brave debut from an exciting voice I'm certainly interested in hearing more from in the next few years.

Disclaimer: This review was based on an advanced review copy supplied by NetGalley in return for an unbiased review