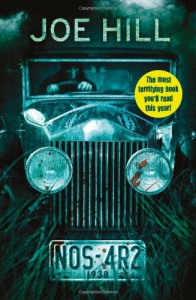 It's been a while since a book has conflicted me a much as this one. I wanted to adore it, my expectation was high (especially after Hill's 'Horns' one of my favourite reads of 2012) and I'm sure that's why I was cross with the middle section of Hill's latest, the scary 'never think of Christmas the same way' NOS4R2.

We start at breakneck speed with the creepy ramped up to 11 with main protagonist Vic speeding from place to place on her bike; a special bike that enables her to travel across a long-ruined bridge which always manages to take her where she needs to be. Think the TARDIS but rickety and smelling of bat pee. It transpires that Vic isn't the only one with this ability, and he's not using it to find lost things either; he's taking them instead.
For Charles Manx (think a cross between Max Shreck's famous vampire and Montgomery Burns from the Simpsons) his conduit is a road, and an extremely evil car: Christine after listening to too many Marilyn Manson albums...

As far as Manx is concerned there are some very unhappy children out there who need rescuing, and where better to take them than to land where Christmas is everlasting? Unfortunately, they'll be disfigured, soulless and their 'useless' parents will be dead, but Hey! Candy canes!!

Without delving too deeply into the plot, while going through a somewhat predictable teen-age phase, Vic gets on the wrong side of Manx, but unlike the others she escapes and lives to fight another cliché....I mean day. And this is where the novel falls down a deep hole for me personally. Hill creates a distinctly unlikeable character in the grown up Vic; petulant, arrogant, selfish and self-destructive. Yes, she's had a traumatic time, but there are times she comes across a bit 'movie of the week' and her 'trials' just dragged on and on. So much so that I longed for her sections to come to an end and the novel to return to Manx and his wonderfully creepy sidekick Bing, one of the better written side characters along with the brilliant Maggie and long-suffering Lou.

These smaller characters are where I feel the book is at it's strongest and I found myself wanting to spend more time with them rather than whiny Vic. Thankfully, this is the strength of the last third of the book as the action is ramped up and resolutions are reached.

One other bugbear I had regarding NOS4R2 is the references to Worlds and works other than his own. As an avid reader of King I'm used to crossovers between an author's other novels, but what Hill does is reference his father's books (most notably the Dark Tower series) as well as other recent novels such as Cloud Atlas. When King self-references it's because he's written it as an inter-weaving World, and regular King readers expect it. But Hill referencing Mitchell was irritating beyond belief. I spent the next few chapters wondering if there was a link, a hint of things to come. But unless I've missed it totally, it was just a nod, I presume to an author he admires.

If goodreads gave reviewers the ability to use half stars NOS4R2 would definitely be a 3.5: too good to be just 3, but not quite 'there' enough for 4.