A Robot In The Garden 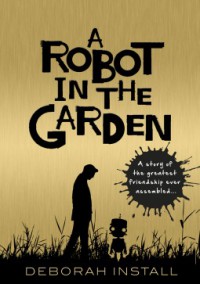 Read my full 5* review at If These Books Could Talk

Ben Chambers has little to do in life. Left a tidy inheritance after his parent’s death, including the house he lives in and his clapped out car, he sees no need to do much more than be there for his successful, highly motivated, barrister wife Amy. So when he wakes one morning to discover an old battered robot sitting in his garden, gazing lovingly at horses in the paddock close-by, he takes it upon himself to track down it’s previous owner. Much to his wife’s dismay, he loads up a backpack and with ‘Tang’ heads off to California on the first leg of a continent-crossing adventure, discovering that he’s actually a far better human-being than he’d ever been led to believe.

And what an adventure it is! Install has created an immediately loveable character in the form of ‘Tang’ the robot. Named by Ben as it’s one of the few words he can say to begin with, Tang develops a formidable personality; determined, cheeky, manipulative, insightful, it’s clear his artificial intelligence is sentient and he’s slowly learning from Ben. As with the plot, Tang surreptitiously drives the narrative, never overwhelming it, in much the same way as his actions push Ben towards the major decisions he needs to take in his life. Often, where a main character is non-human, their human counterpart tends to suffer, but in ‘A Robot In The Garden‘ Ben is just as strong. You feel sympathy for him from the beginning as he’s clearly dominated by his ambitious wife and has always been over-shadowed by his dominant, over-bearing older sister Bryony, who also happens to be Amy’s best friend. So when Amy announces early on that she’s divorcing Ben and going to live with Bryony until she’s sorted, you not only feel for the guy, but also have that sense of ‘good riddance’ as you know that this means Ben can get on with finding out the truth about Tang.

I really can not recommend ‘A Robot In The Garden‘ highly enough, and it’s already a strong contender for my book of the year. Combining the wit, turn of phrase and eye for an absurd situation of the master Terry Pratchett while hitching a ride on Pixar’s emotional rollercoaster, Deborah Install is going to be one to watch. Transworld/Doubleday have a star in the making right here.

I received my copy of this book through Netgalley in return for a fair and unbiased review.