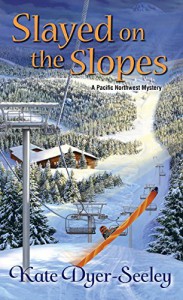 Dyer-Seeley’s second extreme sports based mystery is a cracking read that never flags in pace and is far from predictable. A well-rounded cast of characters surround Meg, each with a purpose to serve, be it the handsome boss, her artistic best friend, the nightmare bridzilla, the cross Sheriff, or the concerned Grandmother who also acts as Meg’s inner conscience, they all mingle with the plot without feeling superfluous.

The real star here though is the scenery and Dyer-Seeley’s ability to set a scene. Don’t be put off by the extreme sports background as it’s just a means to an end. Wallow instead in some glorious locations beautifully described one-minute, and terrifyingly claustrophobic the next as the power of a strong blizzard really comes to the fore. Dyer-Seeley references Kubrick’s The Shining here and she’s clever to do so as once you have that image in your head of being locked-in with nothing but snow, ice, and wind surrounding you, it ramps up the tension perfectly.

If you like your mysteries to be a bit more ‘extreme’ than cosy then this series is the one for you.